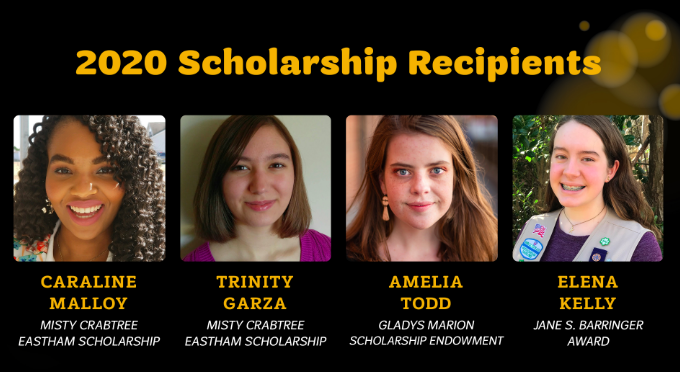 The Gladys Marion Scholarship Endowment is an award given to exemplary Girl Scouts. who have demonstrated significant leadership through earning their Girl Scout Gold Award or equivalent participation in Girl Scout leadership programs. This year’s recipient, Amelia Todd, has been a Girl Scout for 13 years. She is heading to UNC Charlotte in the Fall, where she intends to study architecture and the ways in which design ties into cultural systems.

The Jane S. Barringer Award is a prestigious award which is awarded to one Girl Scout Gold Award recipient each year through the 41-county footprint to further education and professional development opportunities that will continue to support the girls’ development of courage, confidence, and character.

Elena Kelly has been a Girl Scout for 12 years and received the Girl Scout Gold Award in 2019. Kelly will be beginning her higher education at North Carolina State University where she will pursue a degree in Conservation Biology with minors in Forestry and Creative Writing.

The Misty Crabtree Scholarship is awarded to two Girl Scout Gold Award recipients throughout the 41-county footprint each year to honor the memory of Misty Crabtree Eastham, a lifelong Girl Scout, and to further her legacy as a woman who made improving the lives of others a priority in her own life. This scholarship embodies Crabtree’s sense of selflessness, generosity, drive and determination.

Misty Crabtree Scholarship recipient Trinity Garza has been a Girl Scout for 7 years and received the Girl Scout Gold Award in 2017. Garza graduated high school two years early to being working towards a degree in Business Administration Human Resource Management. She hopes to then continue her education through pursing a master’s degree in Management and Leadership.

Caraline Malloy, the second recipient, has been a Girl Scout for 12 years and received the Girl Scout Gold Award in 2019. Malloy will enter her second year at the University of North Carolina Greensboro in the fall where she is studying to become a psychologist. Her goal is to return to Dunn to continue serving her community. She hopes to continue being and advocate and example for younger girls.

“When a Girl Scout earns her Gold Award, she has demonstrated that she possesses the courageous qualities of a community leader. Earning this award is truly a remarkable achievement that shows when girls take the lead they believe that no challenge is too difficult and validates that one girl and one project can have a lasting impact on the world,” said Lisa Jones, chief executive officer of Girl Scouts – North Carolina Coastal Pines.

To learn more about the Girl Scout Gold Award and the scholarships available to Girl Scouts, visit https://gsnccp.org/HighestAwards